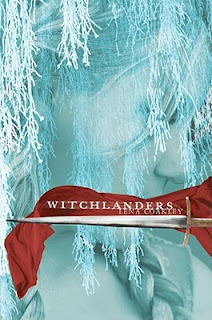 I've really been wanting to read more fantasy so I thought a melding of YA and fantasy could be really interesting. I usually have trouble with fantasy because of the weird names and the slow beginnings, both of which were present in Witchlanders. However I kept going, buoyed by the generally positive reviews I was seeing.

And I'm glad I did because I did grow to care about the story even if the characters didn't grab me as much as I would have liked. I was originally caught off-guard by the fact that this is told in alternating third-person POV focusing on two males-how rare is that in YA!  The first boy is Ryder, a Witchlander who despairs of his mother's addiction and her persistent belief that she can foretell the future. All he wants to do is harvest their crop before winter comes and thereby feed his family. However something entirely different happens when a mysterious stranger's coming is foretold.

That stranger is Falpian, from the border state of Baen, the great rivals of the Witchlanders. The two lands have already suffered a devastating war and signs point to another one brewing. He is secluded, mourning for his twin brother and the fact that hoped-for magic never manifested in him.  But the two boys do meet and discover a special bond between them, that they may need to exercise in order to save their lands.

Although Ryder is introduced first, I ended up feeling more for Falpian, a sensitive boy who never seemed able to live up to his father's expectations.  But I'm so accustomed to first-person that the third-person was a little bit hard for me and I felt at a distance from all of the characters. My favorite parts were when they were exploring their connection and figuring out how it works.  I also loved the history aspects as they discover some shocking secrets about the Witchlands and the Baens. Interestingly there isn't really any romance in this book; instead there is a lot of emphasis on family, magic, action, history, religion, and destiny.  At the moment, there doesn't seem to be a sequel but room is left open. Hopefully we will get to learn more about the other land.

Read for YA Debut Author Challenge and Ebook.