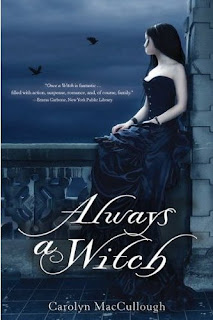 Sequel to Once a Witch

Source: Received a free ecopy via Netgalley in exchange for an honest review.

Some spoilers for Once a Witch!

After mostly enjoying Once a Witch, I was eager to pick up this sequel and even more pleased to discover that there was a significant time travel element!  This book picks up a few months after the first with everyone recovered from the menace of Alistair Knight but still on guard for his next move.  Tamsin is better integrated into her family, having discovered that she does in fact possess a talent and she seems to have a slightly better relationship with her sister as well as a stronger one with boyfriend Gabriel.

However their peace is shattered when a mysterious stranger travels into their time. Tamsin, banking on the prophecy of her grandmother decides that she is the one who must defeat their enemy and travels back into 1877 to warn her ancestors and protect her future.  Most of the book takes place while she is there, attempting to blend in and prepare for what she can.

For me, the best part of this series is the emphasis on family. Despite her difficult relationships with most members of her family, Tamsin fights for them even in the face of the terrifying Knight family.  I also really liked that they were good villains. They were selfish and thought they were superior beings because of their Talents. Because of their presumed superiority, they felt no compunction about hurting non-magical beings.  The solution caught me by surprise and left me admiring Tamsin and her brains for solving the puzzle.

One last note is that I'm not entirely sure about the mechanics of the time travel and how their actions impacted the future. However I was content to enjoy the ride instead of going back and puzzling through this with a fine-toothed comb.

Overall: A nice companion with another exciting, fast-moving story.

Cover: I do love a fancy dress but this one is kind of hard to see; additionally Tamsin's hair is too straight-it's supposed to be unmanageable.