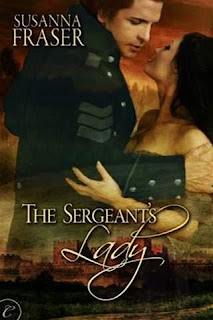 First, I liked the setting during the Peninsular campaigns against Napoleon although fortunately the fighting was not the primary concern. Instead the book looked more at the developing relationship between the hero and heroine.  Will is a good man and soldier but is considered far beneath the likes of Anna, married to a cruel officer.  After his death, they end up as prisoners of a crazed French officer.  When his overtures to Anna turn violent, the two flee, falling in love in the process.

I really liked Will and Anna. They are good, principled, compassionate people with similar interests who spend quite a bit of time together before consummating their relationship. They recognize the difficulties posed by a disapproving society (especially their families) but they cannot deny the deep love they feel for each other.  However they are torn apart, each returning to their families missing their love and hoping to be reunited and married.

Besides the main lovers, the supporting characters were also good as were the historical details.  This isn't a common time period for me to read about but I felt comfortable that most of what I read was consistent with the times if not entirely true.

SPOILER-something I didn't like:
I really disliked that Anna became pregnant and gave birth out of wedlock; it was pretty inevitable due to the lack of birth control during the time and Anna and Will's passion but I would have preferred marriage before baby.

SPOILER-something I really liked:
At the end, Will is set to travel to India to make his fortune and thereby prove himself worthy of Anna. She supports his desire to embark on this new career but makes the very valid point that if they wait to marry until he is rich, then they will have missed out on valuable years together with their children around them. This is such a great point about something that seems to reoccur in historical romances.  I loved its inclusion here!