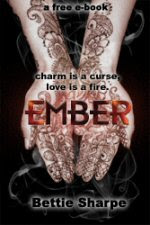 After adoring Cat's Tale, I sought out other work by Bettie Sharpe and of course I had to pick up Ember after realizing it was a reworking of "Cinderella", aka my favorite fairy tale to see fractured and that it was available as a free ebook-double score!  I was a bit wary going in after reading that it was quite adult and had some graphic bits because I usually like a cleaner book but I thought this was worth a try.

Although there were warnings about the level of violence, I didn't find it to be too bad although since I'm used to the Grimm fairy tale where both stepsisters cut off significant parts of their feet as well as have their eyes pecked out by birds, there isn't much that can top that. I didn't enjoy all of the language or sex scenes but I was expecting them so I was able to skim those parts.

Now as to the story, it is told in a similar style to Cat's Tale in that the main character is relating what has already happened with occasional asides to the reader. Additionally the main character is very clever. Ember lives in a kingdom where the prince has been "blessed" that everyone will love him and bow to do his will. She is afflicted but manages to fight it, thereby ensuring that the prince is fascinated by her. As she fights her attraction, she falls for a stable boy named Rian and must once and for all break the curse that the prince has over her so that she can earn her happily ever after.

I mostly enjoyed this story and I loved all of its twists on the Cinderella traditions as well as pokes at Hansel and Gretel, The Princess and the Pea, and Snow White.  My one complaint was a plot twist that was glaringly obvious to me but completely escaped Ember's notice, which dragged the rating down for me.

Overall: Really enjoyable; fast-paced and fun. Recommended with the caveat about adult content.