Where I Want to Be 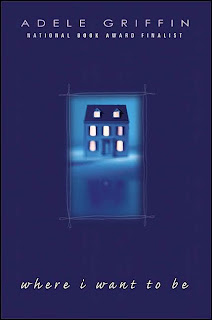 When I was at the library, I was looking around for a shortish book because technically I'm supposed to be focusing on my ebooks. I thought I'd see what Adele Griffin books were on the shelf since I'd already read two and enjoyed them a lot. When I saw that this book focused on two sisters, I was sold.

It alternated between third-person perspective about older, now dead sister Jane and first-person perspective from younger, still living Lily.  The sisters are just a year apart in age but are worlds away in personalities.  Lily is acclimated to the outside world, popular with a boyfriend and a cheery disposition. Jane prefers her solitude where she can pretend and she struggles with Lily's easy acceptance into the outside, away from their house, their family, and her.

The book only covers a couple of days after the death of Jane, switching between Jane's path to an afterlife and coming to an understanding about her life and Lily's struggle to move on.  In general I preferred Lily's narration because of the personality that accompanies a first-person narration and because I was fascinated by her relationship with her boyfriend Caleb, her anchor who keeps her from sinking in grief.  Jane's story is more remembrances of her history and eventually quick segment about her death.

Although I had expected a highly emotional read based on my feelings about sister-sister stories where one of them is hurt or dead, I did not get that from this story. I felt sad for them as their relationship didn't end on a positive note and I was happy that they got a measure of closure.  But I had anticipated crying and an internal ache, which I did not have at the end.

Overall: Well-written but not as emotional as I had hoped.