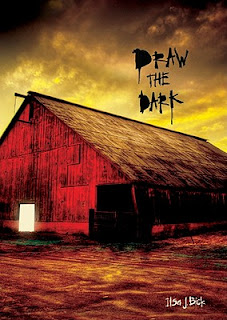 Source: Received a free e-ARC via Netgalley in exchange for an honest review.

At first I found this book really hard to get into. Christian lives with his uncle in Winter, Wisconsin as both of his parents have disappeared into a sideways world and he feels that it is his responsibility to figure out how to join them. This is derailed when he wakes up, having defaced a prominent wealthy businessman's barn while sleepwalking.  He is sentenced to community service and therapy, having always been considered a weird kid.  See, he can draw the worst fears of a person such as his teacher who killed herself after one of his drawings.  Additionally he is having out-of-body flashbacks to post-World War II Winter where he is learning history the town would prefer forgotten.

Although it took me a while to get engaged, once I did, I sped through. Christian is baffled by these mysterious happenings but being of a curious nature, does not shy away from exploring more.  Even as the situations in which he finds himself become more and more bizarre, he attempts to confront them and act.  He tries to be brave and figure out why he seems so different and in the process solves a decades-old case, finally bringing justice to so many people hurt in long-ago Winter.

I don't want to spoil anything about the plot because I want you to enjoy how it unfolds but there are a few things I feel comfortable revealing. One of those is the plot point that German POWs came over to America, providing cheap labor and eventually becoming enmeshed into those communities. I did not know anything about these but according to Bick's author's note, they really happened.  Another is that there are some very intense scenes so I would recommend this for older YA although I leave it up to your discretion, of course. A third is that I feel like this is not your stereotypical YA book, with little focus on romance, its focus on flashbacks to the past as well as Christian's mysterious abilities, and it's pretty dark.

For me, this all made for an unforgettable, exciting read that I highly recommend!