Ramblings and the Week to Come 30MAR14

Update:
Whoa-another post already! I'm still working on getting back into blogging but thought I could at least put up another "checking in" post. Yesterday I posted my first review in a while (Evertrue by Brodi Ashton) and boy was it hard to get back in the groove. I really struggled to form sentences and it's a bit shorter than I expected it to be. Oh well-I know that I am forever a work in progress...

Fun, Fun, Fun:
Last month, the gals at Rather Be Reading notified me that I was featured in the blurbs for Tiffany Schmidt's Send Me a Sign in paperback. I knew I'd want a copy but I only finally got around to buying one and snapped a picture to share below. I've never seen my pseudonym used before for praising a book. For my full thoughts, be sure to check out my review! 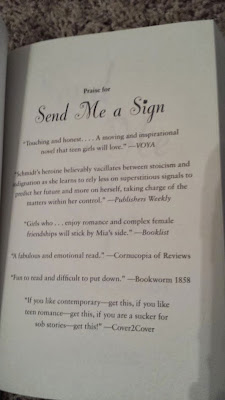 What I've Been Reading:
I started Marissa Meyer's Cress and am working my way through this behemoth. I am also reading Maximize Your Potential edited by Jocelyn K Glei, which is really speaking to me as I think about my career aspirations. I doubt that I'll be reviewing it as I usually struggle to write coherently about non-fiction but at least I'm getting some reading done. I was at the library today and also picked up the latest Rhys Bowen mystery and some Mercedes Lackey books. I think I partly overwhelmed myself with too many e-ARCs. I loved seeing them accumulate on my reader but then it was just too much. Expect to see far fewer in general moving forward as I attempt to regain my equilibrium.

Week to Come:
As many as three reviews if I get my act together so we'll see :)

What have you been reading?

Posted by The Insouciant Sophisticate at 12:01 AM 21 comments: 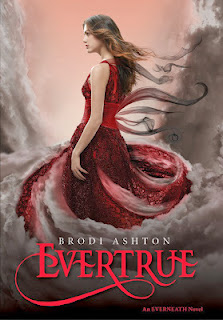 I'll admit that I didn't start this book in the best mood, being somewhat mired in a blogging/reading/real-life funk. However I was sure this would be just the book to pull me out of that due to how much I enjoyed its predecessors Everneath and Everbound. However as you can see from my rating, such was not the case. It's not that the book left me upset or wanting to throw it against the wall (which has been the case with some conclusions to trilogies); it just seemed to fizzle out.

How do I mean? Whereas I found the plotting engaging in the previous books, here everything seemed to move at a glacial pace. Though Nikki and Jack basically retain their characters, with Jack pumped up more aggressively than before due to events in book two, Cole has an abrupt personality change that completely threw off the tone of the book to me. While I was never a fan of Cole (and kind of wanted to throw book two against the wall after what he did), I felt he was really done a disservice by the events of this book. I've seen some fans of his decry this direction so I don't feel the need to add my voice to that chorus but when even a Jack fan finds Cole's treatment egregious...

Something I did really like was Nikki and Jack's plotting to destroy the Everneath. They narrow it down to three steps, three incredibly difficult steps, and spend much of the book attempting to discover if these three things can be accomplished before mounting an effort. Their explorations into these different facets of the Everneath were fascinating even though I still struggled sometimes with picturing everything-this has remained constant throughout all three books.

Overall: A bit of a disappointing conclusion to me-whatever initial fascination this series held wore off early on in this book and I never recaptured that feeling to my disappointment :( I'm glad I completed the trilogy for sure but I'm not sure it was entirely worth the wait.

Posted by The Insouciant Sophisticate at 12:01 AM 11 comments:

Where has Bookworm1858 been?

Hi all! I know it's been a long time (in fact this is the first post I've made in March!) There are two main reasons for this:
1. My work stuff continues to be crazy. It was supposed to die down after March 1 but we're pushing ahead through April 1. Then everything is supposed to become more settled-I'll believe it when I see it!
2. Some personal things have happened as well-not anything I want to discuss with the whole world but very impactful on me.

Consequently I haven't had much free time so I haven't read much-I think I've read three books this entire month, all of which I do plan to review...eventually. When I do have free time, I have tended to either play Freecell or stare at a wall. It's been tough for me but even just writing this post has me more excited about giving blogging more time. I have still been reading posts and comments for me though I haven't commented very much.

I thank everyone who has reached out to me-it means so much to me! I am *hoping *to get up a review later this week and then two more next week plus another check-in post. I also want to stop by your posts and get caught up on your life. I miss you all and I'm sorry I haven't been as present as I've been in the past.

Posted by The Insouciant Sophisticate at 12:01 AM 19 comments: