The Alchemy of Murder 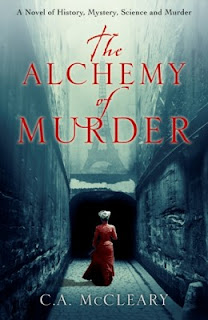 I picked this up at the library because something about the cover made it seem like the kind of book I like. I was right as I enjoyed this largely light-hearted romp through 1889 World Exposition Paris.  The main character is Nellie Bly, intrepid newspaperwoman who is tracking down a crazed mass murderer.

The story is presented as if it is her own memoirs, recovered by editors and edited for spelling.  Thus most of the book is in first-person. However sometimes the action shifts to follow other characters and I'm not sure how that is supposed to be explained if the central conceit is that Nellie wrote these notes. Is Nellie supposed to have recovered them on her own or are the Editors filling in sections for the reader?

Continuing on, Nellie meets many famous figures, most notably Jules Verne, Louis Pasteur, and Oscar Wilde who all play very important roles in the mystery. Verne and Wilde serve as aides for her investigation while Pasteur figures in with information about microbial killers. It seems as if someone is killing the poor of Paris with mysterious microbes that have kept the police baffled.  I really liked seeing the famous figures and I hope, although I haven't researched this, that they would have been in Paris during this time.

Besides microbes, there is also someone killing prostitutes, a la Jack the Ripper and various anarchy plots.  The latter is something I ought to have known but had never much considered. Therefore the discussions of all of those were most interesting to me.  The role of women is also analyzed with Nellie determined to prove that women are not the weaker sex, no matter what gibes the police send her way.

As to the mystery, it was a bit confusing although I really should have pinpointed the murderer. I had an inkling about him but I was too trusting and thought he was only an associate instead of the mastermind.  Someone who is more suspicious will probably finger him much sooner for the heinous crimes.

Overall: Despite the bleak topics presented, this is a largely light and often amusing story with a determined heroine and with the promise of sequels.