After the Golden Age 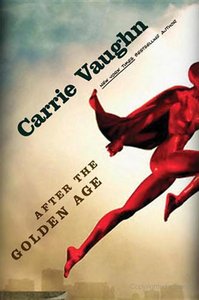 Genre is a little tricky for me to define here as in many ways main character Celia still acts like a petulant teenager yet she is supposed to be in her mid-twenties.  Of course, her life has been difficult in that she's the only child of two of the greatest superheroes yet is completely without superpowers and is the favorite hostage of villains.

I thought this concept was fantastic and that's why I picked this book up. I continued reading because it was pretty easy reading and there were some cool ideas about the nature of superheroes: born or made?  The information about their powers and how they strove to serve the city was very interesting. I always wanted more about them as well as the villains menacing the city. Additionally there's a bit of a mystery as Celia uses her accountant skills to investigate money and paper trails to uncover secrets, which was pretty cool.

However I didn't much like Celia, who whined A LOT. I had some sympathy for her at the beginning but she grew on my nerves even as she worked out some of her issues and matured.  Her relationship with her parents was incredibly strained as she always felt less important than the city and that she was a huge disappointment.  I also didn't really like her romance; there were some elements that skeeved me out but apparently it works for her.

Overall: Great concept, pretty good writing but altogether it didn't quite cohere for me.