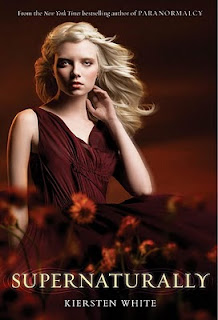 After loving Parnormalcy, I knew I would want to read Supernaturally posthaste. Unfortunately I didn't enjoy this one as much.  Although there is still humor, romance, and twists on paranormal tropes, I felt like Evie's climatic realization took too long. Everything she thought and felt in the last few pages was something I had been thinking and feeling while reading the book. Consequently, I was displeased with Evie and we were most definitely not on the same page.  I also think I liked the first book serving as an introduction instead of this book which felt like it was filled with angst.

I guess in some ways though the angst really fits the description of a second book. Evie ended Paranormalcy having gotten what she wanted: out of IPCA, into Lend's arms, and set on the path of normal high school life. But in this second book, she finds out that she maybe doesn't want that life. High school is stultifying; IPCA does some good things and she'd like to be a part of that; and maybe Lend won't be with her because he will live forever and she will die a mortal death. So she has reasons for that angst. But she kept lying and keeping things from those she was closest to, preferring instead to find out more about her fairy heritage from the unstable character Jack, who is originally presented as a charming ne'er-do-well who takes a much darker twist later in the book.

Additionally there are some plot threads revolving around missing paranormals and Evie's suspicion over her boss's motives that aren't really addressed. I hope they will play a pivotal role in the third book but I feel discontent with the ending regarding that.  I did appreciate more background on Evie and her powers and there was still quite a bit of humor.

Overall: A bit disappointing to me; there was not enough adventure and too much angst for my satisfaction.