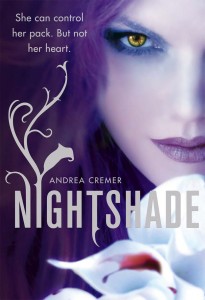 Source: Won a signed copy through Princess Bookie's Contest Craze (interestingly, this is a British edition.)

I mostly picked this up to read because I had won it and because I went to a launch party for the sequel Wolfsbane. I had avoided it before because of the werewolf element, which is not one of my favorite plot points.  But I was surprised by how much I did end up enjoying that!

Calla Tor is the alpha daughter within the Nightshade pack. She is due to marry Ren, the alpha of the Bane pack and form a third pack as a line of defense against Searcher enemies.  This match has been dictated by the Keepers, the human masters who provide everything for the wolves.  Everything about this mythology, what Calla thinks she knows and what she learns over the course of the book was really interesting even if some of it was a bit predictable (ie there were several bits of information that were revelations to Calla but which I had already told her; darn fictional characters, not listening to me!)  But I loved learning about how a pack interacts, how they shift from human to wolf and back fluidly, and the other rituals that comprise their lives. I have so many questions that will hopefully be answered in the next book!

I was somewhat icked out by the romance. Calla is supposed to marry Ren on their 18th birthdays (they were both born on Halloween although tradition mandates that it is called Samhain). He has whored around with seemingly half of the girls in their school while she has to remain pure until their union; I hate when the guy is afforded unlimited sexual freedom and takes advantage of that while the girl is not allowed at all and is forced by other females to dress attractively in order to please him. Additionally I'm grossed out by the fact that high school seniors are being forced to marry no matter what their will.  Ren himself is not to my taste, as a dominating alpha male who pushes against Calla's boundaries and bosses her around (alpha male is in charge of all including and especially the alpha female).  She is frequently referred to as being "his" and "his property."

There is a second romantic option though being Shay. The new human in town whose life is saved by Calla in her wolf form and who really pushes against the boundaries of Calla's knowledge about her shifter role. I liked Shay a bit more possibly because he would never even look at another girl and because we get to spend more time with him.  I don't like him because I'm not entirely sure why Calla does and he is almost as territorial as Ren.  The back cover also references Shay, asking "Is one boy worth losing everything?" My answer is no but this is a strong thread running through the book as is the related question "what is love?" which is partly answered as risking everything to save the other person.  Regardless, there are a lot of scenes with sexual tension between Calla and each boy that worked for me despite my qualms about the romance and the fact that I don't really have a preference.

Additionally within the packs, there are already pairings that seem to be permanent, which is just weird to me. Do some people meet the person they will marry in high school? Yes. Do most? I doubt it. I guess it makes sense because they're all paired up within the shifter community and it would probably be hard to mate outside of the pack with a normal human but it still skeeved me out.

Overall: Juicy paranormal background but some ickiness in the romance.