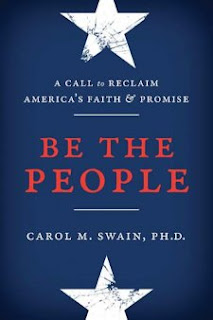 Source: Received a free copy from Booksneeze in exchange for an honest review.

I was a bit skeptical about this book which seemed very conservative in comparison to my more moderate politics.  In general, it seemed VERY right-wing with little moderation and little subtlety.

My skepticism especially increased when Swain talked about leaders who manipulate the truth and criticize those who are not elites. She followed that by holding up Sarah Palin as someone who is not a cultural elite (I agree) and it seemed to me that she is implying that Palin stands for objective truth and just truth in general. This is laughable to me when Sarah Palin is the progenitor of the idea of "death panels," Politifact's Lie of the Year for 2009.

Additionally studies and polls that announced an outcome that differed from Swain's views were subjected to skepticism and accused of bias while those that agreed with Swain were held up as trustworthy. If the former are susceptible to bias and falsities, then why wouldn't the others?  Some of her comments by Obama similarly made me sniff. She presents a poll that stated that about 18% of Americans believed Obama was a Muslim; that doesn't make it true and speaks more to other people's ignorance than anything else, in my opinion. Other rumors are given space and treated as if there is a grain of truth.

I did appreciate the chapter on illegal immigration; not that I agreed with everything presented in it but that it is an issue which I know little about and I do want to learn more. And I think it's great that she included the Ten Commandments, the Declaration of Independence, and the Constitution; I own pocket versions of those but many other people seem unfamiliar with them despite claiming status as an American Christian.