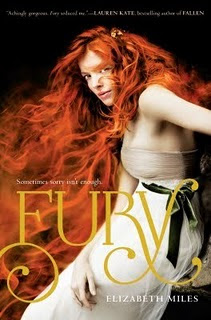 This book brought up a lot of different emotions for me. At first, I was wondering where it was going to take me and yet I wasn't bored but instead I remained content to wait and see where Miles was heading.  I sped through this book in a matter of hours, frantically turning pages and ignoring my family in order to get more pages read.

Second I am uncomfortable with the basic concept of the furies, as described in Greek mythology. They are a trio who wreak vengeance, giving you exactly what they think you deserve; in this case, alternating narrators Em and Chase have done some bad things. But worse things than anyone else in the book or the world? Doubtful. Furthermore as a Christian, I believe that we don't get what we deserve because we are saved by Christ. Obviously I'm aware of other belief systems but the unrelenting force and righteousness of the Furies was hard for me to cope with.

Third I was frequently surprised by the twists and turns. Some things were expected but in general Miles did not hold her punches, upping the tension and surprising me with how far she was pushing the story. Admittedly this didn't happen until maybe two-thirds of the way through when the Furies begin doling out their punishments but once it did, the story was high-octane.

I didn't love either of the main characters who have very poor judgment and morals. Emily tries to steal her best friend's boyfriend while Chase was kind of whiny and defensive about his poor background although I was able to buy into their emotions as written by Miles. They alternate telling the story and I liked the way that was presented, especially seeing their impressions of each other. My favorite character though was JD, Emily's next door neighbor who, unlike most of the high school kids, is pretty comfortable in his own skin, dressing extremely flamboyantly and truly caring about Emily.

Going in to the second book I have some questions. Why are the Furies present in THIS small town? There's one character who knows about the Furies-why the interest and how was that information discovered? Will the second book be narrated by these characters or move on to different perspectives? And is this supposed to be a trilogy?

Content: Some sexual situations; multiple uses of the f-words: the curse word and the gay slur.

Read for YA Debut Author and Ebook Challenges.