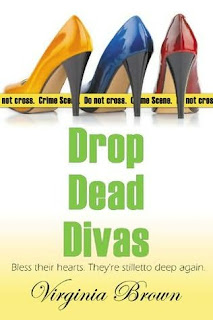 When I requested this, I did not realize it was the second book in a series, which was unfortunate because there are many references to the murder and various happenings that somewhat confused me. I'm also very much not the target audience for this book, which I would describe as middle-aged Southern women like the main characters of this book. In comparison, I am in my twenties and am a proud Yankee.  But there were still charms in this book.

I loved the small-town feel where pretty much everyone knows everyone and is related to a big part of the town. I enjoyed seeing their relationships and the gentle chatter. Because this was a cozy, it wasn't too violent and I enjoyed seeing the ladies detect even when the patronizing police told them to stay at home and knit.

I mostly liked the narrator Trinket although I wish there had been more of her "gentleman friend" Kit, who she says she likes but who we see very little of. I attempted to like Trinket's best friend and cousin Bitty because she plays a prominent role but she's pretty awful and inevitably I ended up cringing whenever she made a tactless statement (i.e. often).

As to the mystery, I didn't think much of it. The story was pretty tightly focused on it although there were diversions as Bitty fears she's about to become broke, despite being very far from that situation.  I'm not sure there were often clues to actually solve the murder but I didn't mind too much.

Overall: A competent cozy; not my favorite and I doubt I will be continuing with the story.