A Vision of Lucy 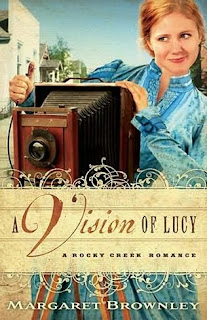 After loving A Lady Like Sarah and A Suitor for Jenny, of course I wanted to read the third book especially after seeing that it included photography. I enjoy taking pictures now but it was so much harder back than and super expensive.

Lucy loves taking pictures, she sees herself as an artist and as part of the future despite her father's distaste for her work and the general town consensus that photography will never catch on.  She loves photography so much that she climbs a tree in an attempt to take a particular picture and ends up falling onto a stage that was being robbed. As the horses flee, she struggles to gain control of the reins and is saved by a mysterious stranger.

That stranger is David Wolf, an orphaned "half-breed" who used to live near Rocky Creek before four boys perpetrated a vicious attack on him. Now that he's a man, he wants revenge and to discover the box he lost that night, the box that might give him the key to his identity.  Although there are numerous suspicions and innuendos about David based on his race, he is actually a brave and kind man who saves Lucy in that moment. Later as she talks, he kisses her, igniting feelings in both of them despite the obstacles between them.

There's a lot packed into this book. Lucy and David have their own separate agendas as does Lucy's brother who's aspiring to be a doctor, three couples who need to declare their love, and the now adults who had tormented David.  They all take up a lot of page time when I really wanted more of Lucy, sweet voluble Lucy. David was a bit annoying to me; he's the one who's concerned about their mixed race coupling while she fights against the prejudice for their love. He also feels so much weight over him because he doesn't know his name (David Wolf being an adopted one) and I just preferred the lightness of Lucy more.

Overall: A sweet romance with many subplots and distinctive characters, including many from the previous books.

Cover: The angle of her face is super weird-what's with that?