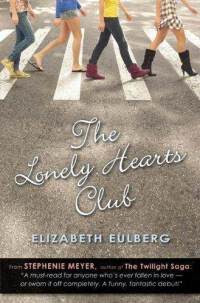 After reading Prom and Prejudice earlier this year, I knew I'd want to check out Eulberg's debut work, hoping for another delightful funny book. I received that, including several scenes where I literally laughed out loud, earning myself some "you're crazy" looks from my sister. What to the evs!

Penny Lane Bloom (yes her parents are Beatles fanatics...and I do mean fanatics. They became vegetarians, not for any moral reasons but because Paul McCartney is a vegetarian) has just had her heart broken by a long-time crush and has decided to swear off boys for the rest of her high-school career. They are just jerks who cause girls to change themselves and dump their friends in order to secure their approval.  Now while Penny may go a bit far in the original manifesto, she has a valid point. A lot of high school boys suck (at least in my personal experience) so why not focus on having fun with your friends and figuring out who you are during those pivotal years?  Thus she becomes the founding (and for a time sole) member of The Lonely Hearts Club, committed to staying single in high school and rocking out to the music of four guys who will never let her down.

Needless to say, this ends up being very popular with the female students at Penny's high school who band together to support each other as one tries out for basketball while another seeks treatment for anorexia.  They focus on friendship and being there for each other. Of course it gets complicated when some of the male students are upset by the loss of their girlfriends and even the principal tries to intervene as well as when a guy who might actually be nice seems to like Penny and she returns the feelings.

Now there weren't any real surprises in this book as it's fairly obvious who Penny's love interest will be and I felt that some of the boy characters were treated much too harshly.  Additionally because of the number of girls involved in The Lonely Hearts Club, some of them don't have much personality nor do they receive enough attention.  But I loved their burgeoning feminism and passion for the idea as well as their ability to soften some of their stances in order to give the reader a happy ending.

Cover: I love the feminine take on the famous Abbey Road album cover.