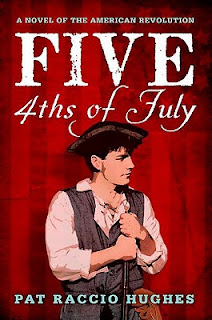 I was browsing in store when I stumbled across this book, which looked right up my alley. I love the American Revolution and I haven't read much about it lately, having focused on more contemporary books. Thus I requested this from my library and dove in once it arrived.

The structure is that the reader sees Jake Mallery on five consecutive Independence Days, 1777-1781. He lives in Connecticut and is a Patriot. And in the beginning, he's a brat, kind of a typical fifteen-year-old boy who's proud, impetuous, and has a bit of a cruel streak, which he exercises chiefly against his best friend's indentured servant, Hannah.  Over the course of these five years, we check in with Jake on Independence Day to see him mature from Boy to Rebel to Solider to Prisoner to Patriot.

The prisoner section was especially interesting because it touched on something I didn't know about; namely the fact that American maritime prisoners were kept in ships near New York with a death toll of approximately 11,500 during the years of Revolution.  As you might expect, the conditions were awful and various diseases are what caused the most death.

The part that was most intriguing for me was seeing Jake mature, as he moved from callow, cocky youth to a more complex man (and he's only nineteen at the end of this). In school, history is often broken down into black and white instead of taking into account the more multifarious opinions that occurred.  In this case, no one was really 100% Patriot or Loyalist but instead existed in shades of gray. That kind of analysis happens more in college and other books, including this fine example of historical fiction.

However I was a bit annoyed with Jake in the beginning as he takes his harassment of Hannah too far; fortunately she's very smart and strong and is able to take his jabs in stride.  Additionally I thought some of the plot twists were pretty obviously foretold, namely the hint of romance and the way that Jake's time imprisoned ends.

Overall: A nice work of historical fiction including a lesser known part of American history and featuring a hero to become invested in.