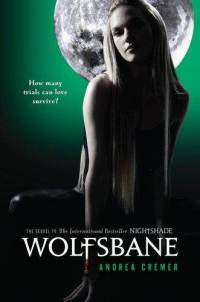 This was a very frustrating experience for me because most of the YA books I've read that feature love triangles are pretty obviously bent to one side (now, I do tend to avoid love triangle stories so my experience is not necessarily representative of the current trends in YA lit). But this book, while leaning one way, has not obviously knocked out the other player.

On the one hand, Shay seems to be the obvious victor. He's now a wolf with a mysterious destiny, has a much higher page count than Ren, makes Calla a little bit jealous, and basically seals the deal by the end of the book. (He's also my personal pick as Ren did some low things to Calla in the first book. Although I'm also on a kill the main character kick, which seems unlikely in this first-person narrated book but if Calla were to die to save her pack, leaving Shay and Ren to mourn, I'd be down with that.)  And yet Ren still remains a presence, confusing Calla's mind and heart.  While I say that I love unpredictability, that element in the triangle is annoying me. I just want Calla to make a decision and remain with it instead of constantly twisting herself. She's supposed to be the alpha, the confident leader and yet when this trips her up, I lose respect for her.

That's the main reason for the low rating. Another is that the characters aren't really exciting to me. Nightshade ended by introducing a bunch of new characters, who are more fleshed out in this book, but none of them grabbed me. We also get to see some more of Calla's pack and the hated villains of the first book but most of the book is spent on the newbies.

The other reason is that I didn't feel very drawn to finish this book. I started it, abandoned it about halfway through, and then came back to it because I knew I wanted to post this review. Thus I did not find it quite as compelling as Nightshade.

However I do think Andrea Cremer shines when giving us backstory and world-building because I gobbled those bits up. I suppose it might have something to do with her being a history professor but the wolf mythology and the way that history has been disseminated among the various rival groups within the Nightshade trilogy has me hooked. I will probably read the third book just to see the unraveling of the past lies and for more of the well-written action scenes.

Overall: Love the wolf parts; not really enjoying the romance.