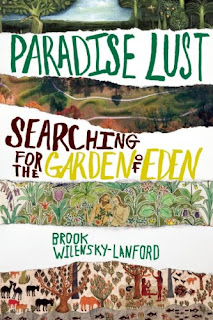 Where is the Garden of Eden? Is it a metaphorical place, located in the mind of believers? Is it a real literal place that can be located using the ever expanding bounds of technology? Is it at the North Pole, in Iraq, in the United States? Brook Wilensky-Lanford set himself the task of exploring theories that have been propounded throughout the years in this book Paradise Lust.  The impetus for the book came from the discovery that his grandfather had searched for the Garden of Eden and an interest in the often fraught modern American relationships between science and religion.

He begins in the late nineteenth century and traces the path to more modern times with theories that pick and choose freely from the biblical literature and previous theories. The men, and it's mostly men, who have undertaken this cast have been eccentric at times and there's a lot of information to convey, which Wilensky-Lanford does splendidly. Wilensky-Lanford also does a good job of explaining the complicated theories and the beliefs that underpin them. He also treated the cast of characters with great respect and even a touch of humor.  The writing style is easy and each chapter is pretty well-contained.

Besides following these religiously motivated quests, Wilensky-Lanford touches on imperialism, science, scholarship, archaeology, geology, history and art, among other topics, creating a book with widespread appeal. This was something I knew little about but because of how Wilensky-Lanford skillfully tied everything together, I ended up very entertained and much more learned about the Garden of Eden.