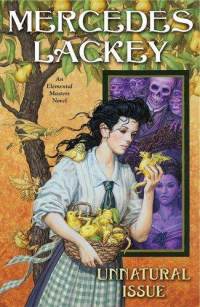 Although Mercedes Lackey is a prolific writer of fantasy, I'm really only familiar with her 500 Kingdoms series and her Elemental Masters series, mostly because they draw heavily on fairy tales. That makes me feel somewhat bad that I haven't explored her oeuvre more but happy whenever a new book comes out such as this one.  This is another companion to the Elemental Masters, drawing upon the fairy tale "Donkeyskin" (yep, the same story that influenced Robin McKinley's Deerskin).  While technically considered the seventh, it takes place before at least one (Phoenix and Ashes) and incorporates characters from several of the other books, expanding on the magical partnerships described in earlier books.

The book opens with Earth Elemental Master Richard Whitestone heading home to see his beloved pregnant wife; alas she had died several hours before he arrived. Although the baby survived, he disowns her and locks himself in his rooms. The child, Susanne, grows up in an awkward place: not quite gentry but not fully a servant. She also takes on the responsibilities of caring for the land that her father had neglected. All seems fine until Richard catches sight of Susanne and realizes how much she looks like his dead wife. He seizes on a plan to bring his wife back to life and to stuff her spirit into Susanne's body using the dark arts of necromancy.  When Susanne discovers part of his evil machinations, she flees and eventually receives enough magical aid to confront her father.

That's only half the story though as WWI breaks out and time is spent on explaining how the war is polluting the soil on which it is fought and how it is decimating their magical ranks and abilities. Now I liked this part but I thought it detracted from Susanne's story.  I would have liked either a shorter story that more closely focused on her or a longer story that could weave in the bits about WWI better.  As it was, I felt only partly satisfied which each half.

I did prefer the bits that drew from "Donkeyskin." Richard Whitestone was very crazed and his menace was well conveyed as was his patronizing sexist attitudes that contributed to his downfall. Among the new people she meets after fleeing are Lord Peter Almsley and his manservant Garrick, who I've read are supposed to be based on Lord Peter Wimsey and the amazing Bunter (who I adore) and have been tasked with tracking down the necromancer.  I really enjoyed them although I haven't read enough Lord Peter Wimsey to give an opinion on how much they owe to the earlier creation.

Overall: A good addition to the Elemental Masters series with some interesting information about necromancy and the darker side of magic. For newcomers, I would probably start with an earlier book because this one isn't as gripping as, say, Phoenix and Ashes.