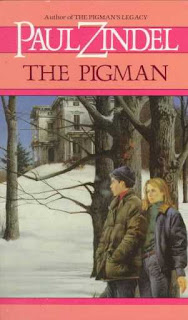 Most of the YA I read has been published very recently, usually within the past year and sometimes a little longer if I'm picking up a series.  But I've been interested in older examples of YA and I saw this on a recommended list of YA Contemporary so I figured "why not?" especially when the library has a copy readily available.

I think my expectations might have been too high because this book, while good, didn't really hit me.  I thought I would be emotional and feel an intense connection to the book but I pretty much felt nothing.  Mostly I compared it to today's YA and how the writing and themes differed or were similar.

I liked that it was told in alternating perspectives between John and Lorraine as they laid out the story of the Pigman, Mr. Pignati.  I cringed at some of the things they did; for example the start of the three's relationship is the two kids conning $10 out of Mr. Pignati as well as getting him to buy them a buttload of stuff.  I liked how their relationship grew and I thought they did some believable things.  But I didn't feel connected to anyone. I wonder if it's because of the alternating perspectives or perhaps that I just didn't like either of the kids. But this book was overall meh for me.