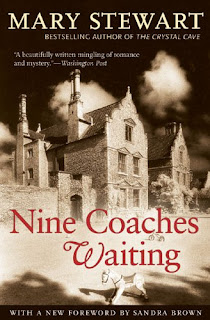 I was very excited to start this book as I thought I had heard something about Cinderella and that it was romantic suspense.  There are some mentions of Cinderella as Linda Martin falls in love with her employer's son Raoul, thereby crossing the line demarcating servant and master.  But overall I was very disappointed.

Linda arrives in France to serve as a governess for young Philippe, a lonely orphaned boy living with his intimidating uncle and aunt.  Although Linda seems to settle in, soon suspicious events worry her and soon she grabs Philippe to run for their lives.

Although Linda repeats her unease of Uncle Leon, I never had that much of a fear of him.  I can seem him be terrifying but his presence wasn't strong enough to permeate every page of the book and scare me.  Linda also develops her suspicions but they seemed rather unfounded to me. Yes, they are revealed to be accurate but it felt sprung upon me.  The suspense was much better in the latter part as they are on the run and are constantly worried about being caught.

Then there was the romance, which was not quite instant love as Linda needed about a whole night to fall for Raoul but I don't know why. She doesn't even know why!  I was very disappointed with the romance when I had hoped for much more. The other characters were also pretty lame although I did like the young Philippe or rather I felt pity for him and his situation.

Overall: Attempts at mystery and romance fall short, failing to grab my interest.