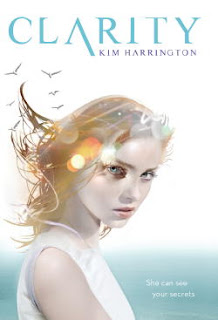 I didn't realize when I won this that it's a mystery, which is what appealed to me the most.  I had several theories and I was kind of right but I didn't quite piece everything together.  Clare does not either until the moment of confrontation.

Which is odd, as she possesses certain psychic powers as does the rest of her family.  Her mother can read minds, her brother Periwinkle, Perry for short, can speak to the dead, and Clare can capture memories from objects.  Together they have a business that is very appealing to the tourists who go through town.

When one of those tourists is killed, Clare is surprised but pleased to join in the investigation for a variety of reasons.  First, no one wants an unsolved murder in town.  Second, competition for her mother has arrived in town and she wants to prove that her family is not faking their powers.  Third, the new cop in town has a hot son hanging around.  And lastly, Clare starts to suspect that her brother may have had something to do with the murder and she desperately hopes that is not true.

I was not really a fan of the romance; surprise, there's sort of a love triangle.  Mysterious new guy Gabriel hates Clare's powers and thus hates one of the defining characteristics about her; this does not stop her from crushing on him nor does it stop him from kissing her.  Her other love interest is ex-boyfriend Justin, who may have gotten a bad rap.  It seems that he was at a party, got drunk, and slept with another girl but I think it might have been rape because the girl may have been fully sober and aware of what she was doing while he was past the point of consent.  However Clare finds herself unable to forgive him (at least at this point).  This could very well be a series so there's plenty of space for development.  In fact there are many places where more could be elaborated and if this does become a series, I hope to see more depth added.