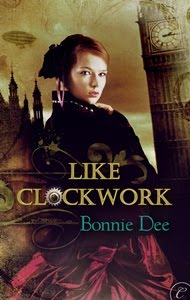 This was a pretty enjoyable novella.  Victoria Waters helped invent automatons but has since regretted the rapidity with which they have  spread through society, taking on roles far beyond the scope she had imagined.  Dash is part of the Brotherhood, a group of concerned citizens who may take radical action to raise awareness about the plight of the unskilled masses who have been displaced by automatons.  Their first radical act is kidnapping Victoria...until it turns out that she willingly agrees to help, eager to do right and to spend more time with the charming Dash.

This is pretty much a case of love at first sight, which I think works in a novella because there's only so much space.  Although their classes are basically opposite, the two struggle against expectations (she was supposed to be a wife and mother while he is a thief yet both aspire to more academic lifestyles) separately and together.  Thus although their romance was quick, they had least had some commonalities.

The other aspect is the steampunk; although the issue of automatons grips society, I didn't feel that steampunk elements played a very big role.  It is much more about human emotions, a point made very clearly.

This all occurs against the background of the Slasher, a sort of Jack the Ripper serial killer who cuts the hearts out of female prostitutes.  I briefly fingered the culprit but quickly dismissed that idea focusing on someone who seemed more likely-shows what I know!