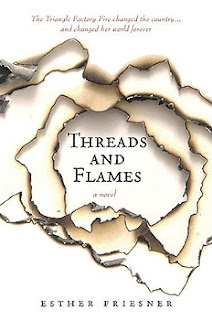 Read for YA Overlooked Book Battle.

This book was a great historical fiction novel with its main conflict coming from the famous Triangle Shirtwaist Factory Fire on March 25, 1911 where the main character Raisa and most of her friends work. But that doesn't occur until near the end of the book.

Raisa just managed to survive typhus in her Polish shtetl before she embarks on a journey to America to meet her older sister Henda who has lived there for the past four years.  On the boat, she befriends Zusa, a young woman about her age, and begins to take care of little Brina whose mother dies on the ship.  Upon arrival, she begins to search for Henda.  Unfortunately Henda had received a letter informing her of Raisa's death and is thus nowhere to be found.  Luckily for Raisa, though, she finds a good room to let and soon starts earning money.  Eventually all of the main young characters end up working for the Triangle Shirtwaist Factory leading to the fire that devastates a community and highlights the inequities of the American economic system.

Raisa was a very brave girl; she turns fourteen on the ship over but she acts much more maturely than me and I'm twenty-one.  She takes on the responsibility of caring for Brina and she works tirelessly to master sewing with a machine as well as learning English.  Of course, she also gets to have fun with her friends Zusa, Italian immigrant Luciana, and dreamy Gavrel, the son of her landlords.

The historical details were fantastic! Although this is not my time period, I felt very immersed in the world described.  Although not much time is spent there, the worst part (and worst because accurate) was the descriptions of the sweatshops, awful places where the cloth is valued more than the people; as Friesner reminds us in her author's note, such places still exist, even in America where they ought not to.  The description of the fire is also powerful with the confusion and the people who jumped out of the window in order to avoid being burned particularly grabbing me.

My biggest quibble was the search for Henda.  Raisa starts strong but as time passes and no sign of her emerges, her fears begin to master her.  The way she finds Henda seemed way too coincidental to me and I rolled my eyes a little.  However I'm glad that Raisa got to find out what happened to her sister so that's good.

Overall: A good historical novel calling attention to the dark tragedies lurking in the American dream.

Cover: I like the title within the charred fabric scraps or paper.
Posted by The Insouciant Sophisticate at 12:01 AM