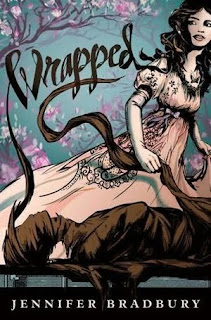 Source: Received a free e-galley via Simon & Schuster's GalleyGrab in exchange for an honest review.

Agnes Wilkins is surprised to find a jackal brooch when she participates in a mummy-unwrapping party at Lord Showalter, her prospective husband and the most eligible bachelor in London.  As she seeks to uncover the message within, with the assistance of the surprisingly dashing Caedmon at the British Museum, she realizes that it might have more modern repercussions than just ancient Egypt.  For there is a spy who is working so that Napoleon just might receive supernatural benefits during his return from Elba. (I worked hard on this summary because the Goodreads summary for the kindle edition has a major spoiler in it!)

What a cute book! Just about all I knew going in to this book was that the cover was gorgeous and it hooked me right away as the main character Agnes Wilkins adores Jane Austen's writing.  That is my kind of heroine!  Besides her appreciation for "A Lady's" writing, Agnes is also learned in ten languages with varying degrees of fluency and possessed with a strong sense of adventure and a keen intellect.  Her partnership with Caedmon begins uneasily but they quickly form a rapport as they seek out threats to England.  Although most of the supporting characters do not play a big role, I was able to create images of them in my head to complement Agnes and Caedmon's story.

The pacing of the story is pretty good although I felt there wasn't much suspense over who the spy might be.  There was a good mix between Agnes attempting to be a proper debutante but also puzzling out the mystery with Caedmon.  I believed in their relationship and rooted for them to be together.  The writing is fine; there were a few funny moments and the language seemed formal enough for the time period.

A point of interest is that issues of gender and class pepper the book.  Agnes is piqued when her father consigns her to the ladies area at one point and makes the decision to NOT tell him about the message despite the fact that she had said she would.  She bristles at being looked down on by men although in general her father is a man committed to gender equality.  She also laments her position in life that prepares her only to be the wife of some lord without being able to travel and study as she'd liked to do.  Caedmon is a lowly duster for the British Museum who wants to be so much more, especially in the heart of Agnes, but finds structures stacked against him.

Overall: A fun mystery with dollops of history and romance!

Cover: Beautiful-this is what originally intrigued me.
Posted by The Insouciant Sophisticate at 12:01 AM