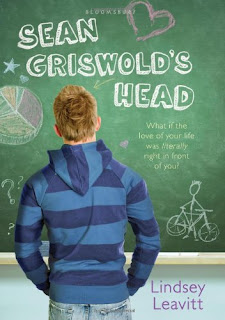 I probably wouldn't have read this if it weren't for the Contemps Challenge and if I hadn't read some other reviews that mentioned that the main character was actually female rather than Sean Griswold.

That main character is Payton Gritas, who upon discovering that her father has MS (multiple sclerosis) and that her family has been keeping that from her for about six months, and consequently she is rebelling.  She gives her parents the silent treatment and her guidance counselor suggests that she choose a "Focus Object."  After discarding several options, she chooses Sean Griswold, the boy who has sat in front of her for classes since third grade but to whom she's never given much thought.

Encouraged by her hilarious and outgoing best friend Jac, she starts by investigating Sean's head but she quickly befriends the boy himself, learning some important lessons along the way.  One is about not judging people by their exterior.  While Payton had written people off as being defined by one particular characteristic, Sean helps her to look beyond that.  He also indirectly helps her let go a bit instead of being so tightly wound.

Sean himself is practically perfect.  He's good looking and athletic (a biker who introduces Payton to the sport); he's a decent student; he loves his mother and is a good friend; he's funny, nice, gives good advice, and is forgiving.  He likes "Seinfeld" and has memorized the episode numbers just like Payton has.  He's the perfect first crush-how could anyone not like him?

Additionally this book also features a good family relationship.  Although Payton is angry at her parents and two older brothers for not telling her earlier, there are still hints of the generally strong family unit they have.  Food and traditions play a big role.  It was nice to see a main character with good relationships with her parents, even if they are strained for much of the book by Payton's anger and fear.

Besides the friendship, the cute boy, and the family bonding, this book is hysterical.  I laughed so many times from the way Payton phrased things and from her actions. Luckily I was mostly in my room so no one saw the weird girl laughing at her book.

Cover: I don't really like his sweatshirt and I feel like a whiteboard is more appropriate for school in in this day and age but I like it.

Read for the Contemps Challenge.
Posted by The Insouciant Sophisticate at 12:01 AM