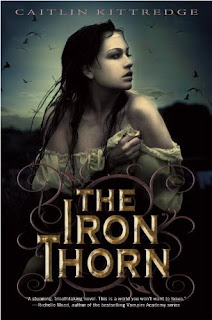 The Iron Thorn by Caitlin Kittredge
Delacorte Press, 2011
492 pages
YA; Steampunk; Fantasy
4.5/5 stars
Source: Won
I wanted to read The Iron Thorn because I remembered how much I had enjoyed Kittredge’s story in Kiss Me Deadly.   Some of the same things I remember liking about that story reappear here-a sympathetic heroine, evocative descriptions, and a story that drew me in.  However as a full-length novel, there is more opportunity for world-building and character and plot development.
The world is a sort of steampunk 1950s New England, based on the writings of HP Lovecraft, which I must confess I have never read or even really thought about reading (I don’t think he has many female characters in his canon).  Thus there are probably many references to his writing that I missed.  Regardless I enjoyed the world created and I’m going to attempt to break down the plot in an effort to give you insight into my impressions.
The novel opens on Aoife with her mother, who resides in an insane asylum in the city of Lovecraft (I think it used to be Boston but perhaps it did not replace one of our cities).  Consequently Aoife is a ward of the state with very little knowledge of her father and with an older brother who has also been deemed insane.  She goes to the School of Engineering, the only female student (in her year or overall, I’m not sure) where she takes comfort in numbers, iron, and the other tenets of the Lovecraftian faith.  Anything outside of this rationality is dubbed heretical and causes suspicion.  When Aoife receives a letter from her on-the-run brother, Conrad, she sets out to leave Lovecraft for Arkham, their family’s ancestral home.  Compounding her desire to find her brother is her fears about her possible pending insanity.  The theory is that it begins at the age of sixteen and Aoife’s birthday is approaching.  In order to escape, Aoife and her only friend Cal engage the services of a guide Dean and flee the city.
Once they have arrived at Gatestone, her father’s home, there is no sign of Conrad but there is an extraordinary house and collection of books just waiting for Aoife to learn about.  Through them she begins to discover her ancestral gift and the terrifying world of the Kindly Folk (who are misnamed; us YA readers may know them better as the Fae, a capricious and wily people).
Aoife was a great heroine.  She bristles at those who would treat her differently because of her gender and she’s incredibly headstrong.  She’s also loyal and curious, which is good for that spurs on her adventures.  Her best friend Cal alternately pleased and annoyed me.  I was glad that he traveled with her because she needed company but as the book progressed, his patronizing attitude toward her increased.  Then came a surprise that twists everything but confirms Cal as loyal to Aoife.  Then there was their guide Dean, the love interest.  Although many times his attitude was also annoying (calling her “princess), something about him made me melt; this was helped by his willingness to believe Aoife even when she feared she was going crazy and he always gave her a (figurative) shove to keep going.  Unfortunately Dean smokes, a habit he’ll need to kick if he wants to secure a coveted place on Bookworm1858’s Top Ten Boys in Books list.


Overall: A long, luxurious read full of details and atmosphere. While I loved this, I would definitely recommend doing a bit more research before you buy it to make sure that it really appeals to you.
Cover: Not a fan; I guess it conjures up darkness and fear but I don't find it very enticing.
Read for YA Debut Author Challenge.
Posted by The Insouciant Sophisticate at 12:01 AM