The Art of Romance 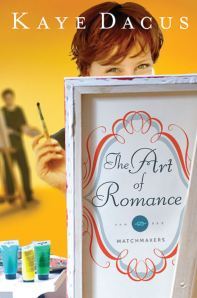 I did not like this book as much as Love Remains but the ending still made me a little teary-eyed as I ended up invested in the relationship of Caylor and Dylan, both of whom believe they have significant baggage.

Caylor lives with her grandmother, having moved in after the death of her grandfather to provide transportation and support.  She has resigned herself to never getting involved in a relationship due to her obligation to her grandmother.  Instead she celebrates Zarah and Bobby's pending marriage and throws herself into life at the college where she is tenured and into her inspirational romance novels.

Dylan has legitimate baggage and then baggage I found ridiculous.  The legitimacy comes from a verboten relationship with the head of his department at the art school in Philadelphia where he used to work.  She was controlling and slowly changed most of his personality and cut him off from his family.  The fact that she was older and more established in the field than him gives him worries in relation to Caylor, who is also older and already has tenure.  The other baggage? Well...

Dylan refers to his big shameful secret about what he did to put himself through college before revealing it to his three brothers in a very sweet "intervention" scene. I expected this to be that he stripped and/or served as a gigolo to wealthy older women.  Instead his secret is that he designed and modeled for romance covers.  Um, kind of lame? Not worth as much anguish as he spent on it.  Funnily enough, his covers were for Melanie Mason...the pen name of Caylor, under which she wrote increasingly steamy novels and was inspired by the handsome model on the cover.

I definitely liked the book more once they got together because their whingeing before that dragged on too long.  Besides their romance issues, Caylor has conflict with her irresponsible younger sister Sage and Dylan struggles with his parents's expectations and their inability to accept his art as a legitimate career path.  Those stories were okay but I wanted more romance.  I also would have liked more God; although finding a church is an important part of the story, I wanted to see more of each of them having a relationship with God instead of having church signify such a relationship.

The romance novel plot was interesting to me because I'm pretty sure that such inspirational romance writers as Francine Rivers and Robin Lee Hatcher wrote secular romances before switching exclusively to Christian romances in order to write cleaner novels and include mentions of God.  I think Caylor is supposed to have followed the same path as them.  It also makes me wonder if Dacus used to write secular romances?

Overall: An okay romance with some interesting subplots; I'm hoping the third book, Turnabout's Fair Play will be more to my taste.

Cover: Caylor's not the painter but it fits in with the pattern established by Love Remains.
Posted by The Insouciant Sophisticate at 12:01 AM