Between Here and Forever 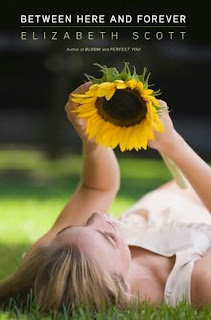 Between Here and Forever by Elizabeth Scott
Simon Pulse, 2011
252 pages
YA; Contemporary
4/5 stars


Source: Received an e-galley via Simon & Schuster's GalleyGrab.
Summary: Abby can hardly bare it that her perfect older sister Tess languishes in the hospital.  In a desperate attempt to pull Tess out of the coma, she enlists hot guy Eli to speak with Tess.But as she single-mindedly pursues that plan with Eli, her world is rocked by revelations about Tess, Eli, and herself.
I flip-flopped on this book as I read it.  Some parts were achingly beautiful, grabbing me by the gut and making me feel more intensely than other books I've read recently.  Other parts made me want to grab Abby and shake her though as her constant putdowns of herself drove me crazy.  Because one guy wanted Tess more than Abby, she views herself through that prism resulting in constant self-pity that she tries to say is her being realistic.
She also is very unaware of the secrets of Tess, some of which I uncovered before Abby confirmed them.  Abby persisted in the belief that her sister was perfect, blinding her to the pain Tess caused both to herself and to those she loved. Tess was cruel, compromising her own happiness but Abby begins to learn to separate herself from Tess for her own sake.
Meanwhile, Abby is kind of slow to recognize those truths.  It was SO obvious that Eli liked her from the very start and she kept pushing him off toward Tess. She also learns about how everyone has something about themselves that marks them as “different” even if outsiders can’t tell. My description sounds trite but I thought Scott’s writing was beautiful and it made me a little teary-eyed. Those parts were the standout to me; Scott's writing is fantastic although it could not rescue my opinion of the annoying Abby.

Overall: I didn’t love the plot or the characters but I loved the writing and that’s what made this book for me.
Read for Contemps Challenge and e-book challenge.
Posted by The Insouciant Sophisticate at 12:01 AM