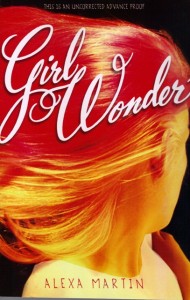 I did not much like this book, largely because of the character of Charlotte.  And it was not because she made a number of incredibly stupid decisions (although she did) but because her motivations were imperfectly described for me and I did not like her.

First her parents have uprooted her from Florida to Seattle, meaning she has to make a brand new set of friends.  Their marriage also begins to break up from a variety of tensions, largely the father's adultery.  Her father also puts pressure on Charlotte to attend a big-name Ivy, something that won't happen with her grades and that results in her feelings of inferiority.  However Charlotte is less concerned with this, managing to put it out of her mind as school concerns overwhelm her.  Because of her dyscalculia (difficulties with math), she is unable to attend the same swanky private school as her younger brother nor can she participate in the gifted program at her public school, resulting in too-easy classes.  Thus when gorgeous bright Amanda and hottie Neal notice her and invite her to become involved in debate, she jumps at the chance.

I understood her desire to have friends (who doesn't want that?) but I was always suspicious of Amanda and Neal and how they could destroy her life.  Thus as she struggled in debate, in her relationships with those two, in using drugs, I was shocked.  I could have been sympathetic, had there been a foundation for me to empathize with Charlotte but I just didn't feel it.  She was a superficial passive sometimes mean girl.  To her credit, she recognized her superficiality and seemed to be moving past it at the end of the book.  But it was too little, too late.

In all honesty, I think I would have preferred a story from her younger brother James Henry's perspective.  He was much more interesting and less surly.  He adored his sister and his mentor Milton in such a sweet way.

Read for YA Debut and Ebook challenge.
Posted by The Insouciant Sophisticate at 12:01 AM