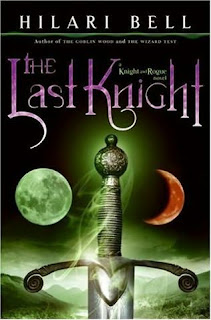 Eighteen-year old Sir Michael has decided to take up the lost art of knight errantry in order to avoid a stultifying existence on his father's estate.  He saves a seventeen-year old Fisk from his criminal existence to serve as his squire.  One night they rescue Lady Ceciel from a tower only to discover the next day that she had been sentenced there for poisoning her husband.  They must track her down and bring her in for justice in order to be redeemed in the eyes of the law.

I really enjoyed the alternating perspectives as first Fisk and then Michael tell their story.  They have many amusing side adventures as they attempt to track down Lady Ceciel and become actual friends.  Michael, raised as a noble, abhors the idea of lying while Fisk, as a pretty successful conman, has lying as his natural instinct. The conflict between the two over this was very amusing; in general, I sided with Fisk because some of their tasks would have been easier with lies.

I wish we could have had more back-story on Fisk's past as a thief; there are hints but I felt more could have been elaborated.  I also would have liked to know more about Michael's past.  I enjoyed seeing the characters as they were but I wouldn't have minded learning more.  The world was also somewhat sketchily outlined.  There are two moons on the cover, which seem to reflect gods but I didn't fully understand their belief system.  Magic is also present in this world.  Luckily there appear to be sequels so hopefully I can learn more through them.

Overall: An nice story about his knight errant and his squire that left me eager for the next book.
Posted by The Insouciant Sophisticate at 7:18 AM