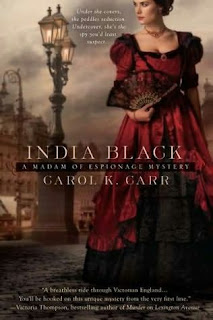 I saw several positive reviews of this and then was lucky enough to win a copy. I was hoping for a good mystery although I would classify this as more of a thriller.  India becomes deeply involved in the political intrigue of the late nineteenth century, especially the diplomatic differences between England and Russia.  This results in masquerades, debauchery, imprisonment, and gunfights among other thrills.


It starts off very bluntly with “My name is India Black. I am a whore” although technically she’s a former whore, who now runs her own brothel, not that most people would make that distinction.  Anyway a British governmental official dies while being “helped” by one of India’s girls.  As she attempts to move the body under cover of night, she is met by another official Mr. French, who, upon discovering that an important satchel has gone missing, blackmails India into helping him recover it, thereby beginning her thrilling adventure.
India was a hilarious, self-deprecating woman. She knows that most people look down on her but she’s proud of running her own business and of her brains (and justly so).  She’s self-sufficient and can look out for herself.  Her narration provided some hilarious moments and usually broke right through the tension and suspicion of some scenes.
I wanted more Mr. French-I’m predicting a bit of a romance eventually for the two of them and it will be delicious! I enjoyed his role as well as the appearances of Benjamin "Dizzy" Disraeli and William Ewart Gladstone, dueling prime minsters with very different aims.  Other characters provided additional color.


The sequel is listed on goodreads: India Black and the Widow of Windsor.  I haven't seen a summary and I don't like the cover as much as this one but it looks like it might involve Queen Victoria more which I would enjoy.
Overall: A great start to a series; can't wait to continue!

Cover: I love a gorgeous colorful dress on the color.
Posted by The Insouciant Sophisticate at 12:01 AM