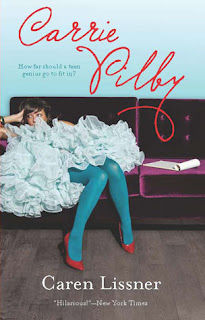 This was an interesting read, balancing YA and adult.  I guess it's supposed to be more YA due to its publisher but given that Carrie lives alone in her apartment having completed college by the age of 19, she's also almost an adult.  However her father pays for her apartment and for her to attend therapy because Carrie has some problems.

She skipped three grades in school, leaving her the smartest in her grade but far behind in social skills.  Her father promised her that things would get better in college (she went to Harvard) but they were not; she was just as out of place there as she had always been.  Her sessions with her therapist, which were some of my favorite parts, consist of him encouraging her to get to know people and to be more open and less judgmental.  Carrie considers most people hypocrites and obsessed with sex so she spends most of her time alone.  As she begins to talk her therapist's advice though, she discovers a brand new world.

I started off really liking Carrie but she was such a pessimist and so sure of her own superiority that by a third of the way through I was a little tired of her.  Luckily she began changing then, which made her a lot more enjoyable to read.  Since the book was told in first person, it was very helpful to me once she changed. I must say that I did enjoy her personality and I think we could have been friends even though she is much, much smarter than me.  Happily I have more social skills than her so I think we could balance each other out.

Overall: I can definitely see Carrie's voice grating on people but if you stick with this book, you'll see a warm-hearted young woman who learns so much about the world and about herself.
Posted by The Insouciant Sophisticate at 12:01 AM