The Diamond of Drury Lane 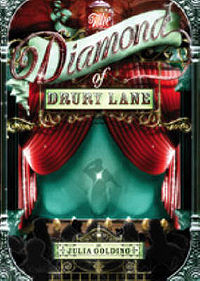 Read for YA Book Battle and also because the sequels looked really intriguing.

Cat Royal is an orphan living in the Theater Royal in 1790 London.  She has been unofficially adopted by the theater folk and has lived there as long as she can remember.  Living among the actors, writers, and designers as well as the gangs that control the seedier sections of town is a not too bad existence.  Then one night she hears about a diamond hidden in the theater, which sends her off on vivid imaginings and kick-starts this story.

The next day she meets a new friend, Pedro Hawkins, a former slave (not sure how as slavery wasn't abolished in the UK until 1833) with a remarkable agility and incredible talent with the violin.  His skill attracts the interest of Lord Francis and Lady Elizabeth and a mystery around the treasonous cartoons of "Captain Sparkler" springs up.

Cat is a great heroine.  She's a colorful heroine with the plentiful sprinkling of the slang of the times and she speaks her mind.  In general, she's up for any adventure and she's very loyal.  Cat also begins writing, something I bet becomes more prominent in later books as she ages.

Besides being a fun adventure, this book also treats themes of gender, race, and class. Cat would love to be part of her friend Syd's gang but he will only let boys join, even if he's only known them for a few hours.  She protests the unfairness of this and hopes that Syd doesn't harbor deeper feelings for her.  Pedro is easily accepted but some of the meaner characters do mock him based on the color of his skin and claim their own superiority over him because of that.  Class is another element; lords have the final say while penniless orphans can only hope for some protection.

My main quibble is that it was a little long and the mystery is a bit simplistic (my rationale is that I figured it out and I hardly ever do that).  There's a lot of promise for future books.

Overall: Great historical mystery with an engaging main character-definitely excited about the sequels.

Read for British Books Challenge.
Posted by The Insouciant Sophisticate at 12:01 AM