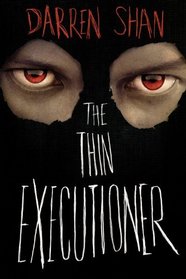 This is a book I would have never read if not for the Overlooked Book Battle. Which means that I am very grateful to whoever nominated it because I loved this book!

I began uncertainly because the world in which Jebel lives is very cruel.  There is a warrior society and all Jebel wants is to succeed his father as the executioner and marry the beautiful Debbat Alg.  Unluckily both of his older brothers are stronger and more obviously warriors than he is.  However when he feels shamed by his father, he makes the rash decision to journey to the mountain of the fire god Sabbah Eid to request invincibility.  He acquires a slave Tel Hesani, who will be sacrificed to the god and they set off.

Jebel is cocky, proud, and closed-minded at the beginning of his journey.  He looks down on slaves and feels no compassion, which would be defined as weakness in his society. But Tel Hesani faithfully serves him as they embark on their adventure.  He is a peaceful man who came on the quest in order to save his family even though he knows it means his death.  As they experience incredible hardships, Jebel learns some important lessons and begins to rethink his entire outlook on life.

I really had no expectations with this book.  It looked long (it is) and like a "boy" book (fitting since there is only a smidgen of romance and a great deal of killing and even cannibalism).  However I flew through the book as I was kept in a constant state of suspense and it's not at all fair to reduce the potential audience for this book or to generalize that there's one kind of book preferred by boys and one kind preferred by girls (we all like lots of different things.)  I ended up blown away by the incredible plot and characters.  Jebel's character transformation made me so happy and the villainous characters who appear really freaked me out at times (cannibalism!)

Also apparently the Adventures of Huckleberry Finn served as inspiration although as I haven't read that, I can't comment.  There is also possibly some political commentary as two trickster traders are named Blair and Bush; I'm not entirely sure what it might mean but I can say to be wary of their intentions.

Overall: A good reminder to not judge a book by its cover/plot summary! Highly recommended!

Cover: His eyes are scary but I like the fonts.
Posted by The Insouciant Sophisticate at 12:01 AM