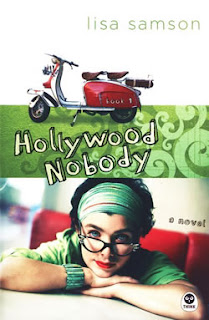 Hollywood Nobody by Lisa Samson
NavPress, 2007
209 pages
YA; Contemporary
4/5 stars

Read for YA Book Battle Longlist

Scotty and her mother Charley spend their time on film sets as Charley is a food stylist.  This peripatetic lifestyle is largely to Scotty's taste as she has a good relationship with her mother, she gets to meet lots of cool people (including up-and-coming hottie actor Seth Haas), and she's very independent.  There are downsides though.  Charley won't tell Scotty anything about her father, Charley's vegan lifestyle keeps Scotty from her beloved cheese, and sometimes moving around isn't all that fun.

Scotty is incredibly likable, smart, funny, friendly, creative, and adventurous.  Everything you could want in a narrator.  Her constant pursuit of cheese was especially funny to me.  She also loves movies and creates a blog celebrating the hot guys, the normal-sized women, and the talented in Hollywood (among other things).

On the latest film set in North Carolina, she embarks on a new set of adventures from the mundane like reading The Great Gatsby and conquering geometry to keeping the very cute Seth Haas from the clutches of rude Karissa Bonano, exploring Christianity, helping new friend Joy Overstreet, and escaping from the big biker dude.

The presence of said dude leads to a shocking revelation of Scotty and Charley's past. I spent much of the book wondering about the twist and hoping that Samson would tell in this book despite it being only the first in a series.  And we do find out.  There are good reasons for Charley keeping it hidden but I found the reason outlandish and not in keeping with the general tone of the book.

I also mentioned Christianity above.  This is a Christian series but it's not a big part in this first book.  Scotty has no religious background but becomes intrigued by tent meetings in the small town where they're living.  While she finds the events of the tent meetings uninspiring, she does find Jesus compelling.  That rings so true with me; even if ritualistic and legalistic actions threaten to engulf Christianity, I turn to Jesus and it's alright.

Overall: A cute and funny story with a fantastic main character.

Cover: Actually quite accurate with her glasses and not straight hair.
Posted by The Insouciant Sophisticate at 12:01 AM