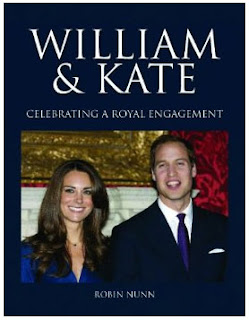 Unlike the previous books I've read about the Royal Engagement, this book was originally more focused on Will until the realization of how important Kate is in his life.  Additionally this is more of a photo-essay book as large glossy pictures accompany the text.  Consequently the writing is much less in-depth and less important than the pictures.  There is no essay for the engagement photos other than the caption and date.

What is different is some "new" photographs of young William and his mother (I am not familiar with them, showing that they were not in the previous books I've read but they may be familiar to long-time royal watchers) and even some new ones of Kate.  There is also a brief chapter about modern royal marriages in Europe, with the examples of Sweden, Norway, Denmark, Monaco, Spain, and Belgium, showing how commoner/royal marriages have been well-received in their countries and how they can serve as models.

I know it's been a month since the wedding itself but this was the first opportunity I had to schedule this book.  It's certainly worth at least a skim to see the pictures but the text does not really present anything new.

Cover: Her hair looks so good and the blue is such a gorgeous shade!

British Books Challenge
Posted by The Insouciant Sophisticate at 12:01 AM