A Tale of Two Castles 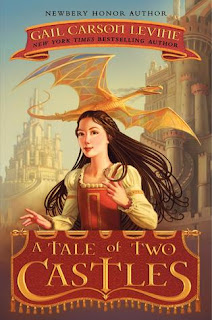 I really like Gail Carson Levine so I was excited to see another book by her.  The cover indicated a dragon and hopefully another spunky heroine in the vein of Ella Enchanted.  I got that in the dragon Meenore and the would-be actor Elodie.

And I did like those two elements but the book as a whole didn't cohere for me. It felt disjointed and it seemed like a character would be introduced for a few chapters and then leave just as I was starting to get to know him. This happened several times.  I also found Levine's made-up words and names more annoying than cool, which might have been different if I'd read this when I was ten.

However I did enjoy the wrapping up of the plot.  Elodie unravels a mystery and I really liked how she deducted and induced clues.  Happily it didn't take her too long to do this and I was caught completely off-guard by the villain.

Overall: The pieces for a great story are there but it didn't come together as I hoped.

Cover: For those who've read the book, I like that Elodie isn't wearing a cap ;)
Posted by The Insouciant Sophisticate at 12:01 AM