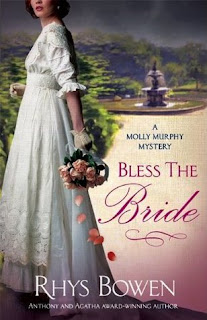 The tenth book in the Molly Murphy series, this time featuring Irish immigrant Molly's last (?) case before her marriage to New York police detective Daniel Sullivan.  Molly is requested to find an exquisite jade piece by a wealthy Chinese man, later discovering that she is actually meant to find his new (illegal immigrant) bride and return the girl to his domain.  Molly has to figure out the whole story in order to make sure she's doing what's right.

The story starts with Molly in the country, meeting her future mother-in-law Mrs. Sullivan, who seems to think that Molly is highly unworthy.  Thus Molly is happy to return to the city and pleased to take on one more case before retiring after marriage.  The case seems straightforward but new complications keep popping up.  The most interesting part was seeing the discrimination against the Chinese immigrants.  I did not know that Chinese women were forbidden from coming to America (although this was circumvented by the very wealthy) although I did know about the general stereotype of Chinese as ignorant and lazy, despite many examples of the exact opposite (um, Trans-Continental Railroad?)

Through Molly's investigations, she also comes to question her future with Daniel; she doesn't want to be a woman who's under his thumb with her spirit crushed.  Luckily Daniel is less imperious in this book than in others, which makes me like him more.  I think Bowen walks a tricky line well to make him palatable to modern readers but also era-appropriate.  I would not want to read a book with a stereotypical male hero of the time-period, who would resent all rights for women.

As to the mystery: I basically figured it out! This indicates that it was perhaps not as difficult as others because I really am not good at solving mysteries in general.  I tend to trust the characters too much.

SPOILER: Wondering if the series will continue; there is an interesting path it might take (involving head of the Secret Service John Wilkie from the previous book The Last Illusion) and I would love to read about that.

Cover: I like the colors but I'm not a fan of the cut-off head on book covers.

Read for Cozy Mystery Challenge and British Books Challenge.
Posted by The Insouciant Sophisticate at 12:01 AM