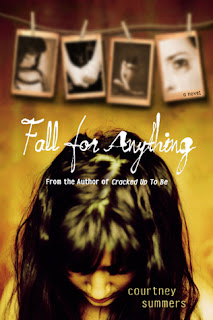 Fall For Anything by Courtney Summers
St. Martin's Press, 2010
230 pages
YA; Contemporary
4/5 stars
Contemps Challenge
Source: Received for review
Summary: "When Eddie Reeves’s father commits suicide her life is consumed by the nagging question of why? Why when he was a legendary photographer and a brilliant teacher? Why when he seemed to find inspiration in everything he saw? And, most important, why when he had a daughter who loved him more than anyone else in the world? When she meets Culler Evans, a former student of her father’s and a photographer himself, an instant and dangerous attraction begins. Cullen seems to know more about her father than she does and could possibly hold the key to the mystery surrounding his death. But Eddie’s vulnerability has weakened her and Culler Evans is getting too close. Her need for the truth keeps her hanging on...but are some questions better left unanswered?" from goodreads
Thoughts: Courtney Summers writes some of the most wrenching stories.  I read Some Girls Are earlier this year and was twisted by the mean girl plot and the general cruelty.  This is difficult in a different way as Eddie and her mom struggle following her father's suicide.  Neither wants to get dressed, wants to interact with people, wants to live the house.  Eddie is also pissed at her mother's busybody best friend who comes to live with them, to get them through this time.  I can't imagine what it's like to lose a parent, let alone through suicide.
I was disappointed with Culler-he was too much of a cipher and I wanted him to be completely psycho and to threaten her life or something.  Instead he does prey on her vulnerability but in a quieter way (I hope that makes sense).  I also wanted an answer to why but sorry, there are no cut and dry answers.

One character I was really interested in was Milo, Eddie's best friend who is maybe in love with her?  I didn't feel that I got to know him well enough and their relationship was confusing. Sometimes she was jealous over his relationship with a girlfriend but she wasn't interested in him herself; she just didn't want to share him or let him have any relationships outside of theirs.
Overall: Dark, deceptively simple prose make for a haunting story.
Cover: I didn't understand the photographs at first but then I read that her father was a photographer and she still retains some of his pictures so it makes sense.
The book came out today so if you would like to purchase this book, here are links:
Book Depository
Amazon
Barnes and Noble
Borders
Posted by The Insouciant Sophisticate at 12:01 AM