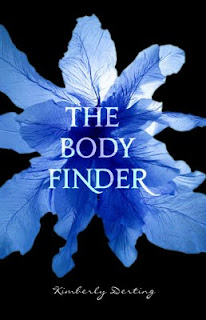 Summary: It all started when Violet was eight and she discovered a dead body using her special power-she can sense the echoes of murdered bodies and the imprint on the killer.  Now that she's in high school, a murderer is terrifying her hometown and she may be the only one who can solve the case. Her best friend Jay has no intention of letting her go alone and losing her, raising a new wriggle in their long time friendship.

Thoughts: I was amused to note that almost all of my goodreads friends have either read this or want to read it; I didn't realize how popular it was around the blogosphere but it must have been when it first came out.

I want to divide my review in to two segments: the paranormal and the romantic. The former I liked, the latter I had some problems with.  There are other things I liked and didn't like but I want to just focus on the clash of genres.

The paranormal (and mystery too) aspects of this book were fantastic.  I really enjoyed the idea that Violet could somehow sense when a murdered body was in the vicinity as well as sense the imprint of that murder on the murderer's body. I was also proud of her for using her power even when it was hard for her or when her family/friends worried about her.  Of course she did some stupid things, such as go running with headphones on (not recommended even if a serial killer is not menacing your general area; perfectly fine if you're on a treadmill!) and she continually ignored her parents' desire to keep her safe.  She feels suffocated so she wants to be alone but being a young female alone is exactly the kind of girl the serial killer wants.  Maybe they were overprotective but she's their only child and I found it perfectly understandable.

I also really enjoyed the chapters told from the serial killer's perspective-they were terrifying but it was different.  Additionally, I don't remember ever reading his (not a spoiler-serial killers almost always seem to be male) name.  He's so average and able to blend in that a name is not required.

Then there was the romantic.  Violet all of a sudden has feelings for her best friend Jay; puberty has been very good for him and Violet is not the only girl to notice this.  I loved the scenes of Violet being jealous of the other girls throwing themselves at Jay-hilarious!

But then they got together and it moved in to romance novel territory.  Now I like romances (I've reviewed them on my site) but I thought it was a bit too steamy for YA although still technically clean and it was boring.  Basically all they did was make out once it happened.  I did like the way their romance started though-a real hero moment for Jay.

Overall: I would have preferred less of the romance and more focus on the paranormal which would probably mean a slightly shorter book.

Cover: I think it's a lovely cover-gorgeous blue against the black backdrop.
Posted by The Insouciant Sophisticate at 12:01 AM