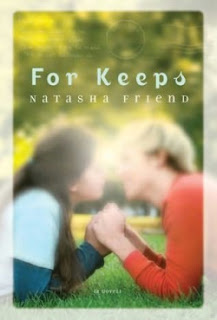 Summary: Josie didn't need a father because she had her mother Kate, who dropped out of high school when she became pregnant while Paul, the father, and his family moved to Arizona.  But now his parents are back and he may soon follow, reducing Kate to a bundle of nerves.  But new relationships in both of their lives as well as in that of Josie's best friend Liv may cause them to question their entire lives.

Thoughts: I saw this featured on some blogs as somewhat like Gilmore Girls due to the close mother-daughter relationship.  The story starts with showing us that but their relationship quickly unravels as Kate starts dating a new guy and Josie becomes more interested in finding out information about her paternal family.  Their relationship crumbles so fast that I found it very unbelievable; maybe their relationship wasn't as strong as I thought.

Then the guys they start dating kind of suck: Kate's boyfriend is too clingy, Liv's is too old and emotionally unsupportive of her, and Josie's is represented as okay but I didn't think he was redeemed after his jerk behavior in the middle. But not all of the males are awful.  Liv has two dads who love each other and her very much.  And Josie's grandfather is another warm and loving male.

The revelations about Kate and Paul were heartbreaking and Josie's reactions angered me but were also somewhat realistic because how else does one respond to news that shakes up her entire worldview.  The novel ends on an optimistic note although as mentioned Josie forgave her boyfriend who I thought should have been kicked to the curb.

Overall: Okay contemporary novel; appreciated for its emphasis on family.

Cover: I would have preferred mother and daughter to daughter and boy plus why is it so blurry?
Posted by The Insouciant Sophisticate at 12:01 PM