A Suitor for Jenny 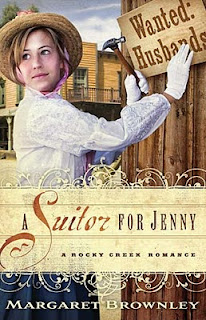 Summary: Jenny is bringing her two sisters Mary Lou and Brenda to Rocky Creek in order to get them married to some eligible bachelors. While she has a system for picking out the right man to take care of them, her sisters have other ideas.  Marshal Rhett Armstrong is supposed to make sure she doesn't make a nuisance of herself but instead finds her intriguing.  Can God bring these two broken people together?

Thoughts: Her sisters kind of bugged me; I knew that they wouldn't listen to their older sister but they acted without a care for their reputations and futures.  I wish they had acted with a bit more dignity and appropriateness.

I really liked Rhett.  He was a good man.  I also liked Jenny and it was easy to root from them to get together despite their individual guilt complexes.

She got over her issues very quickly-I kept expecting to find out what she did (well I was pretty sure I knew what she had done but to have it clarified) and then it came out right at the end with very little explanation.  Rhett also struggled with guilt issues that he overcomes very quickly.  I'm not sure why either plotline was included when they were going to be dealt with so perfunctorily.

I was hoping that we'd see Sarah and Justin from the first book and we did receive a glimpse in to their life, which seems very happy! They are very much in love and have built a good life together.

Overall: Cute story but not as good as the first!

Cover; Her face looks really weird, I'm not sure if it's the angle but it doesn't look like it belongs in that hat.
Posted by The Insouciant Sophisticate at 12:01 AM