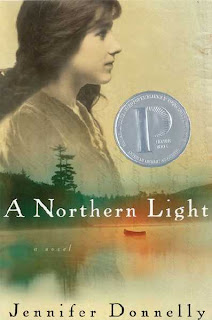 A Northern Light by Jennifer Donnelly
Harcourt, Inc, 2003
380 pages
YA; Historical
4/5 stars
Source: Library
Summary: Mattie Gokey wants to be a writer but is refused as her father needs her at home to help raise her younger sisters and to help plant the fields.  When she ends up working at a hotel to earn extra money, she meets Grace Brown who is discovered drowned, the real-life murder that inspired An American Tragedy.
Thoughts: I decided to read this after loving Jennifer Donnelly's Revolution, another YA historical novel.  I was intrigued by the fact that it's set against a real-life murder which ended up inspiring A Place in the Sun. I wanted more about the murder and less about Mattie's depressing life.
Indeed this is a very sad book.  Mattie's mother died and she's now struggling to help support her family's farm as the eldest of four daughters.  Mattie wants to be a writer but that seems impossible due to their straitened circumstances.  There are people who support her but they are powerless in the face of her father.  Her hopes are raised several times only to be dashed.
Besides this indecision, Mattie is tied to her promises.  She promised her mother to help raise her sisters and she promised Grace Brown to burn her letters.  She makes her final decision at the end, after months (and pages) of agonizing.
Overall: Beautifully written but tremendously sad.
Cover: Fits the bleakness of the landscape.
Posted by The Insouciant Sophisticate at 12:01 AM