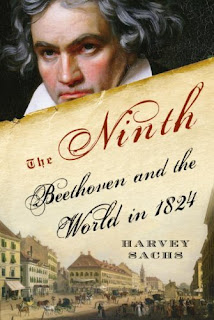 Summary: A look at the pivotal year in music of 1824 with the premiere of Beethoven's masterpiece, the Ninth Symphony.  Additionally examinations of other Romantic artists of the time, a look at the symphony itself, and how this symphony influenced later musicians.

Thoughts: I wanted to read this because of the cover and because Beethoven is my favorite composer.  I'm a violist and I've been lucky enough to play the First, the Fifth, and the Sixth-I wish I could have the opportunity to play more.  I really liked the first section which explored Beethoven writing the symphony and then arranging for its premiere in Vienna.  This was a good historical narrative.

Then it went to the second part with other artists such as Lord Byron and Alexander Pushkin; they may or may not have been motivated in similar ways to Beethoven and they may or may not have heard his music.  Any way, it was boring.  The third section was also boring with long descriptions of his impressions of the symphony but not in a technical way, which I think I would have appreciated more.

I also liked the fourth section because of the adulation Hector Berlioz had for Beethoven.  Berlioz is my second favorite composer and he wrote my favorite piece Symphonie fantastique. I guess I know why I like Berlioz so much now; he calls back to Beethoven in some ways while also being totally original and himself.

Overall: Boring and while technically short, seemed much longer.  While I've heard the Ninth, I definitely want to listen to it again.

Cover: I still love the cover; it attracted me to the book.
Posted by The Insouciant Sophisticate at 12:01 AM