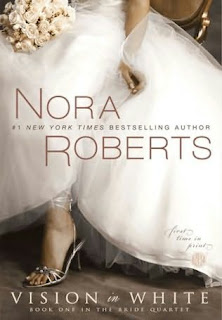 Vision in White by Nora Roberts
Berkley Books, 2009
325 pages
Romance; Contemporary
4/5 stars
1st in Quartet
Source: Library
Summary: Mackenzie and her three best friends run a wedding planner business. Mac is the photographer, an interest that stems from her broken childhood.  Both of her parents have been divorced and remarried several times and it created instability there.  Additionally her mother is emotionally manipulative of Mac.  So while Mac is surrounded by happy couples every day, she has not had success in that realm.  Until Carter Maguire runs in to her wall and they begin what could be a casual fling or something more.
Thoughts: When I saw the concept for this quartet, I knew that I would want to read it.  I love the preparations for weddings and I have never actually read any Nora Roberts so I thought this could also serve as an introduction. I really liked it so that was a good decision.
I wasn't sure about Mac at first; she seemed a bit prickly and I didn't immediately like her.  In fact I was more interested in her friend Parker who is heroine of the last book.  But I was able to sympathize with Mac as her issues with her mother block the formation of a healthy romantic relationship with Carter.  Hmmm Carter.
Carter is practically perfect; he's a teacher which means he loves kids and wants to help people.  He looks hot in glasses and tweed-I am only now starting to realize how hot guys can be in glasses.  He's supportive of Mac and he's basically been in love with her since high school.  He's adorably awkward around her because he likes her so much but he doesn't want to rush her in to anything that she's not ready for.  I'm so glad they were able to commit to each other and I'm hoping we'll see their wedding in one of the later books.
Note: I saw some reviews that said Roberts was repeating herself.  But I had never read any Roberts so I cannot comment on this.  If you have read any of her novels or read tons of contemporary, it may seem too familiar.  If you read more historical, it may seem more fresh like it did to me.
Overall: Pleasant start to the Brides Quartet; I'm definitely looking forward to the other stories.
Cover: I understand the theme obviously; Mac is a photographer (hence 'vision') and she loves shoes so maybe that's why it's peeking out from under the skirt?
Posted by The Insouciant Sophisticate at 12:01 AM