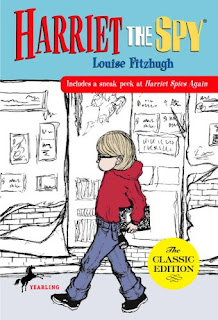 Recommended by April of Good Books and Good Wine.

Summary: Harriet M Welsch maintains a notebook in which she keeps notes of all the people she observes because she wants to be a spy when she grows up.  But problems erupt when her schoolmates discover the novel and the things she wrote about them.

Thoughts: I had attitude about this book due to the movie which I didn't think looked interesting (I've never seen the film-just trailers) and the fact that Mallory Pike of the BSC once wanted to act like her and I hated Mallory.

The first part of the story is actually more focused on Harriet's nanny Ole Golly and just setting the stage.  I actually preferred the story once Ole Golly leaves but Harriet suffers a bit seeing the person who understands her leave.  Her parents don't understand her writing but Ole Golly told her about spies and encouraged her to write.

The second part of the story revolves around the classmates discovering Harriet's novel where she wrote a lot of mean-spirited observations, such as why a friend doesn't have a dad and how another friend couldn't become a scientist, who was she fooling, etc.  I had little sympathy for Harriet at this part; she couldn't understand why they were hurt and angry and retaliated.  For someone who is so smart, she had a serious lack of understanding here.

Luckily, the book resolves with a hopeful ending.  Harriet learns to think more critically about her writing and receives a new opportunity to practice it.  She also becomes reconciled with her two best friends and the future looks more hopeful.

[I agree with her classmates that a tomato and mayo sandwich sounds awful but Harriet loves them; I do admire her routine of having it every day for about six years though.]

Overall: Okay story; maybe I would identify more if I was a writer?  As it is, I'm only a reader but a voracious one at that.
Posted by The Insouciant Sophisticate at 12:01 AM