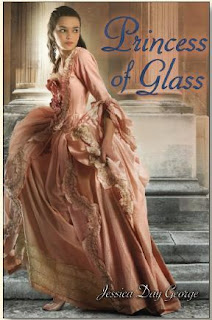 Companion to Princess of the Midnight Ball, (based on The Twelve Dancing Princesses) which I read pre-blog.

Thoughts: I love retold fairy tales, especially Cinderella stories plus I enjoyed the first book so I knew I'd be reading this at some point.  The big twist on this story is that we see the Cinderella story from the outside.  Poppy is a visiting princess and the Cinderella is Ellen, a servant who used to be noble but has been reduced in circumstances.  Her godmother has promised her marriage to a prince.

Now that prince is Prince Christian who was interested in Poppy until the enchantment around Ellen, or rather Lady Ella, draws him in and distracts his attention.  Additionally she draws the ire of most of the women because she entices most of the men.  It's up to Poppy to save them due to her experience with magical enchantments.

Final conflict=lame.  The villain brings almost everyone together in a conflict that is so short; it felt really anticlimactic.  I wanted a bigger battle with higher stakes and I didn't get it.

I also wish that I remembered more of the previous book because I remember it having a strong emphasis on the sister relationship which is referenced in Poppy missing her sisters but obviously can't be represented as well here.

Overall: I was wavering between 3.5 and 4 but then I thought about how much I loved Poppy, an independent funny character and thus I gave it a boost.

Cover: Gorgeous dress and it connects to the first book without being a copy.
Posted by The Insouciant Sophisticate at 12:01 AM