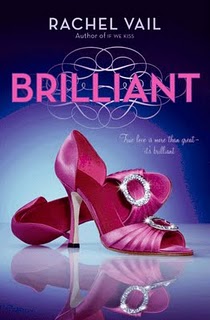 See review of Gorgeous from early days of the blog.

Summary: The conclusion to the Avery sisters trilogy, focusing on eldest sister Quinn and her learning to let go and accept their new life.

Thoughts: I enjoyed the first two books of this series so I was thrilled to pick this up, especially because I love the cover.  I want those shoes even though I don't think I own a dress to go with them.

The first problem was that I couldn't really remember either of the first two books but I figured that was okay because they can be read as stand-alone books. The next problem was that I found Quinn to be so immature despite being the eldest of the daughters.  She's so invested in being "perfect" and "brilliant" that when she realizes that doing that is impossible, she breaks down and annoyed me to no end.

Second was her crush on Oliver, her piano teacher who was apparently nineteen despite having taken a year off before his junior of college.  I think that was made as well as her being a junior despite being almost 17 (about a month) so that it was less creepy.  Instead I found it inaccurate and unlikely-most of my classmates were definitely 16 for the majority of their junior year of high school and twenty for their junior year of college.  Their age difference, while not that big if they were 24 and 26, is a big deal for people who are still trying to find themselves.

I really wanted more information about what her mother did at her job that caused them to lose so much but I didn't feel like there was much time spent on that because I had to read Quinn be whiny and annoying.  I also didn't like the descriptions of the sisters because I'm sure that I loved them when I read their respective books.  To be honest, I'm not entirely sure why I bothered finishing the book because it was not good.  The first two were but this was a crappy conclusion.

Cover: I love this cover; the shoes are gorgeous and the colors work so well together.  In fact all of the covers are absolutely beautiful.
Posted by The Insouciant Sophisticate at 12:01 AM